After a long, hard day of crocheting at the ski mountain (resulting in 3 new squares), I returned home and cut out pieces for the remaining 7 penguins. 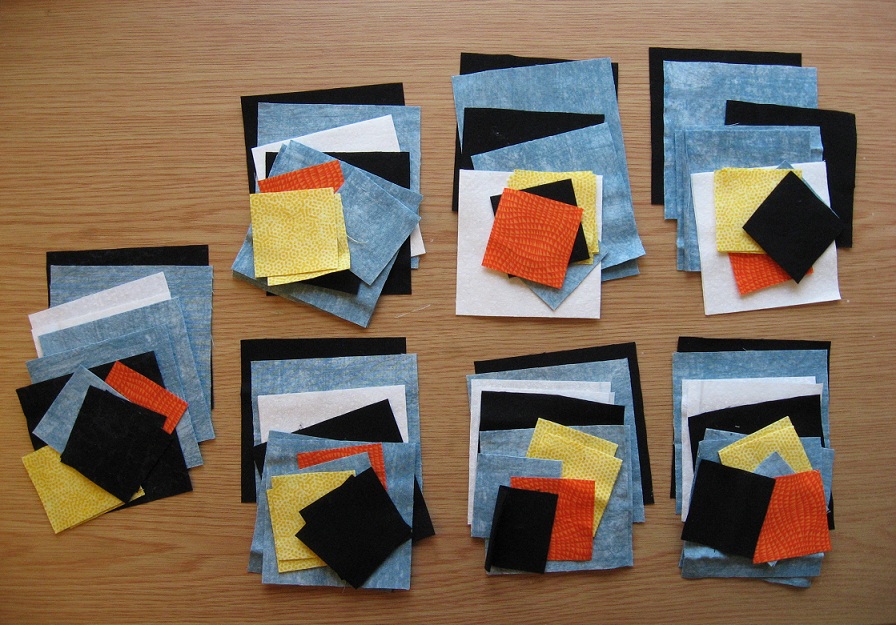 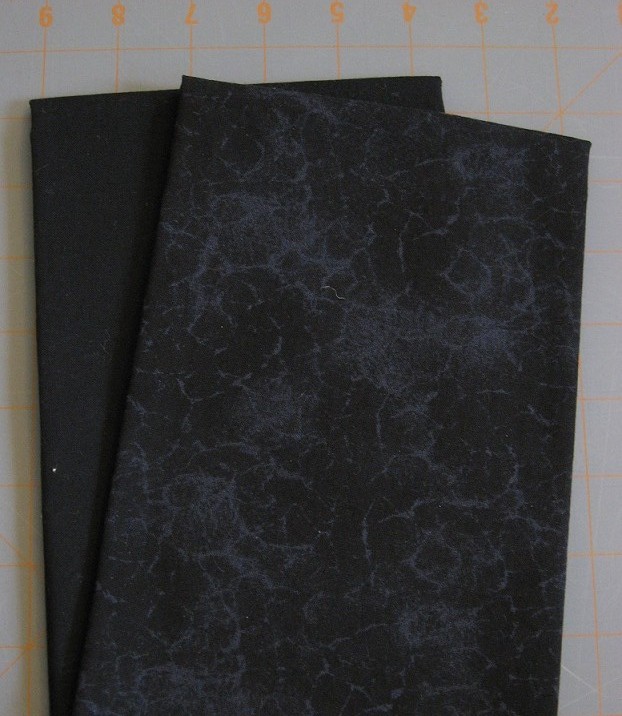 Six of the penguins will be mottled black, and six will be solid black.  When I had been considering a much, much larger quilt design, I hadn't been able to find enough of the mottled black to make 30 penguins, so I was going to make some solid black and mix them up.  Even though I'm only making 12 penguins now, I decided to continue with mixing the fabrics.  Hopefully they'll work well together.


Also, one more mountain under my belt.  That brings me up to 15 High Peaks.  No pictures this time, unfortunately.  It was a grey and windy day up at the top and we didn't want to stay exposed on the summit for very long!


Linking up with Fabric Tuesday and W.i.P Wednesday.
4 comments: 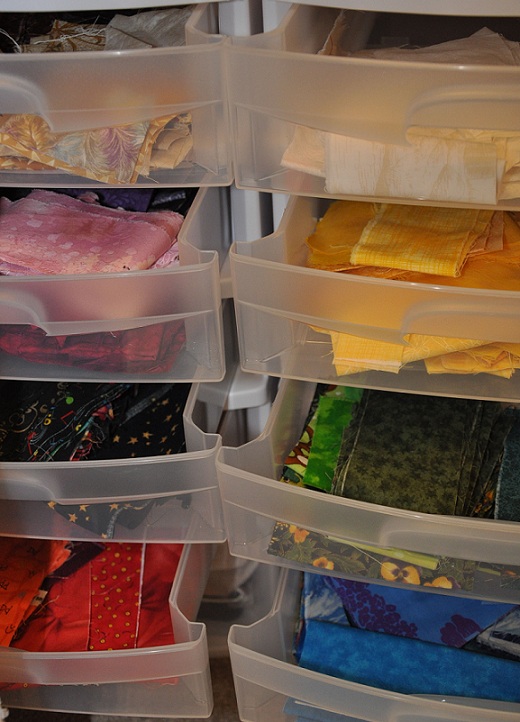 Ever since I've started quilting, I've saved scraps of fabric.  Pretty much every scrap: big scraps, small scraps... my mom's scraps (Hi mom!)...  pieces smaller than I want to use, even.  I would open my scrap box, stuff in the new scraps, and that would be that.

But I recently decided to take a chance and open an etsy store, which prompted me to start making some small items.  So I opened up the shoe box that contained my scraps, and fabric that hasn't seen the light of day for a while now has hope of being used again.

Well the first thing to do was to change my storage method.  Every time I went to look for a scrap I had to pull every piece out of the shoe box, one by one, and the piece I wanted was invariably on the bottom of the box.  So I went and got some bins, and now my scraps are separated by color.  There were only eight drawers so some colors have to share, but it's much, much better than it's been.

Well, if you've made it through all that, I do have some sewing to share.  I've been wanting to make a winged square block, so I pulled out some scraps, and found all those triangles already sewn!  I took that as a sign.  I think my favorite part is the yellow circle centered in the middle of that small square in the upper right!

Now I'm trying to figure out how to quilt it.  I have a quilt plan, ambitious as usual, and I am primarily a hand quilter.  But I was shocked at how long it took me to hand quilt the last pillow I completed, and the quilting wasn't even that complex or dense!

So I'm looking for some advice.  Do go with my original quilt plan and hand quilt it?  Do I come up with a quilt plan that I can execute on my machine?  Or do I compromise and do a little bit of both?


Linking up with W.i.P Wednesday.
2 comments:

Here it is!  My original plan in all it's glory.  I was hoping to have all the blocks finished by last Wednesday but alas, it was not meant to be.


Right now I have 56 squares making a layout approximately 33 x 37 inches.  I am trying to make a small blanket, but I'm pretty sure my baby quilts are larger than that - which makes this blanket too small!

My new plan is to continue crocheting squares until I've run out of yarn.  First up is one more row and one more column; six more pinks, and five more each of black and teal.

I'd love to hear your opinions on how big this blanket should become!
No comments:

Phew, what a week.  There hasn't been too much time for quilting lately, but I hope that will change soon!

I've continued work on my granny square blanket.  I'm almost to my previously defined evaluation point, only two "blue mint" squares to go, but I've already decided to crochet squares until I reach the end of my skeins.  The current size just seems unusably small.  We'll see where my new path takes me. 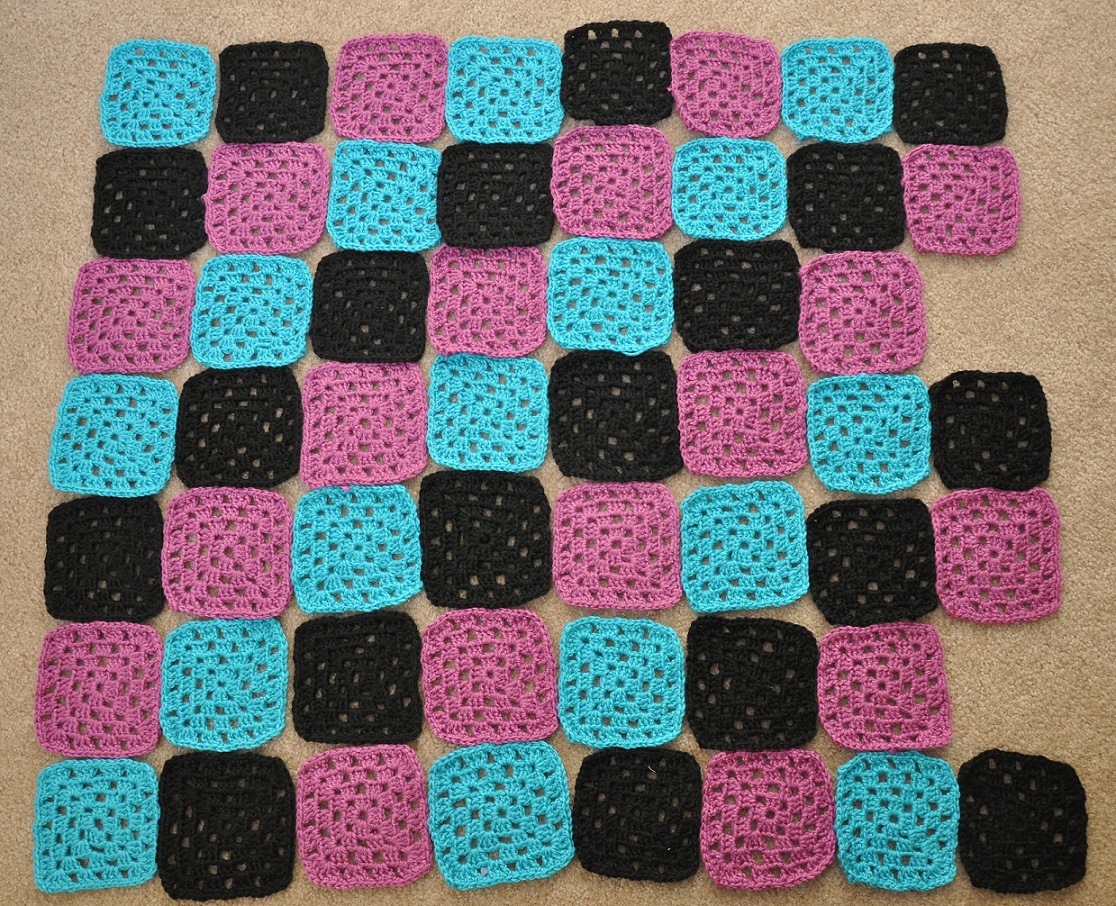 On the non-crafting front, I was out of town this weekend making strides on another work in progress: hiking all 46 of the NY high peaks.  This past weekend I got my 14th high peak overall, and my first winter high peak.  It was a gorgeous sunny day, and much much warmer than it could have been.  We couldn't have asked for more.

Linking up with W.i.P. Wednesday.
No comments:


This week I've needed a quick and portable project so I rustled up my crochet hook.

I must have started making granny squares about 5 or 6 years ago now.  A friend had decided to make a granny square blanket for her sister and it seemed like just the thing to add to my compendium of projects.  So I (ambitiously) purchased 6 or 7 skeins of yarn and over the years I've slowly been adding to my collection of squares. 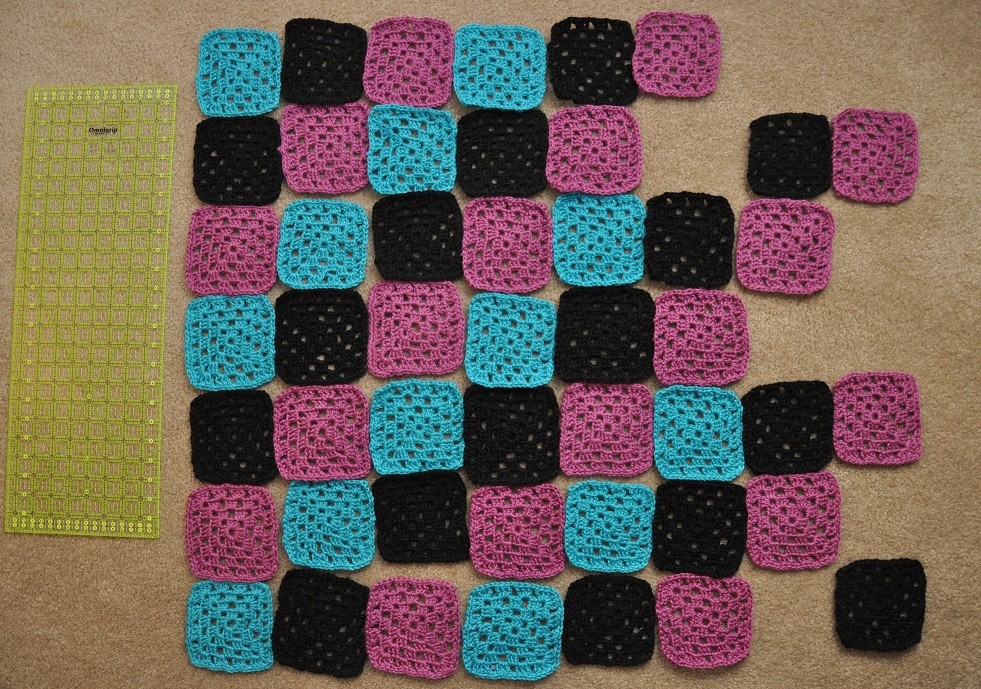 But this year I've finally given myself a goal.  I've been aiming for a trial layout 7 squares by 8 squares to see what it looks like.  I've laid out what I have, and my ruler claims it will be about 33x37.  That seems small for a blanket, so there will probably be some revaluation of my plan... 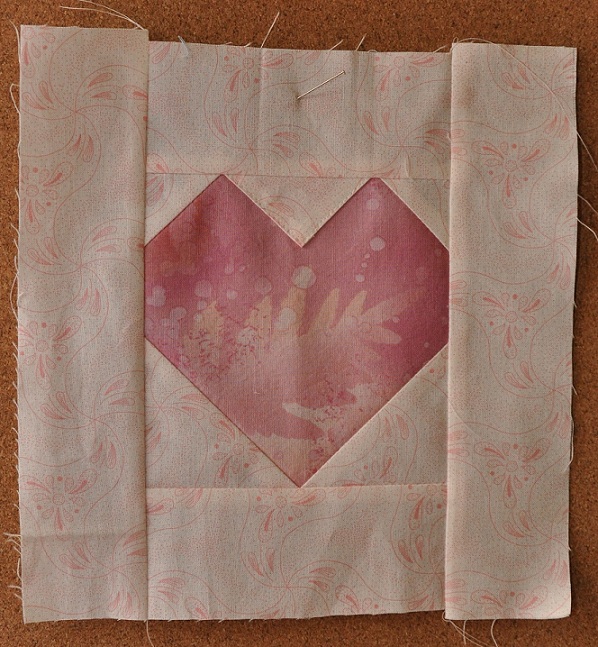 On the quilting front, I'll offer up this new little guy.

In the midst of reorganizing my fabric space and trying to intersperse small projects in the midst of the monsters, I have come to the realization that I need to interact with my fabric more.  How else will inspiration know where to strike?